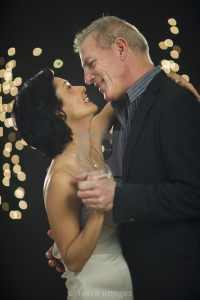 A dance partner: that’s what a woman really wants from the man in her life–besides caring, sharing and other stuff?

As any grandfather fox-trotting with younger women at a wedding will attest, most women love to dance and wish their Significant Others would be more romantic on the dance floor.

But the fact is, most men won’t dance.

It’s not merely that they don’t know how–OK, Michael Jackson and Mikhail Baryshnikov being exceptions–but they can’t even bring themselves to try.

Why should this be?

Yet when the average American man is invited to dance, he makes throat-clearing noises and stays rooted to his seat.

The answer lies in the differing ways men and women regard themselves and their bodies.Also, in the way in which society as a whole regards dance.

Dancing is an elemental form of human expression, a conduit for communication and intimacy that awakens within us a deeper awareness of both the sacred and the profane. It synchronizes us with one another and with the natural rhythms of our lives.

Whether in the context of a tribal celebration of the hunt or in a Fred Astaire-Ginger Rogers movie, dance answers the deep need humans have to touch one another and move our bodies together.

It’s not surprising that women say they find in dancing pure freedom of movement, a physical release from their cares. That’s why they find it so frustrating when the men in their lives refuse to dance. 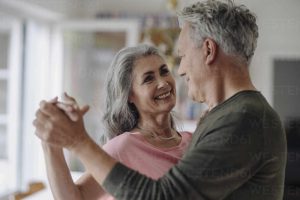 “I always had boyfriends who wouldn’t dance,” says Janet Stetson, who grew up dancing and is trained to teach dance to children. “I’ve heard women over and over say how their male friends don’t dance and how much they’d like to go out dancing.”

Stetson, whose husband, New Yorker cartoonist Danny Shanahan, is willing to dance–but only in the privacy of their home–says her experience with teaching dance to boys has convinced her that most men become inhibited early in life.

Yet at least some men who adamantly refuse to dance really wish they knew how.

“Do I dance? I would have to say no,” says Lou Mande. “I would like to be able to dance. It would make my wife happier if I could.”

For Mande, an Albuquerque lawyer who doesn’t see himself as inhibited in most social settings, dance Angst might arise at a wedding. Should his wife, Debbie, also a lawyer, ask him to dance, he is likely find an excuse to say no.

“There I am back in the eighth grade, over with the boys,” he says. “And somehow, the girls know how to do it.”

“That heritage has stayed and made its imprint rather strongly in American society,” Hanna says.

Americans have at times also objected to social dancing on religious or moral grounds, sometimes to the extent of banning it altogether, says Judith Bennahum, a University of New Mexico professor and past president of the Society of Dance History Scholars.

“People sweat and get red in the face, and that’s too dangerous,” she says. “It’s too suggestive, and I suppose it permits the body to lose control.”

That preoccupation with control has led men to adopt an unnaturally rigid, inefficient style of body movement, says Bill Evans, also a University of New Mexico dance professor and founder of the Bill Evans Dance Co. Their model is the ramrod-straight posture and forceful gait of soldiers and cowboys.

Women, on the other hand, are more comfortable moving their bodies in a natural, rhythmic way, because “any softness, any lateral movement in the hips, is part of as being a feminine characteristic,” Evans says.

Men won’t dance thanks to “the terrible fear American men have of being feminine and homosexual,” dancing is suspect, he says.

Ironically, the one part of the country where social dancing remains consistently popular is southeast Texas, where many men readily take part in country-Western dancing, Evans says.

“They’re all in their cowboy hats and cowboy shirts, with a beer in one hand and a woman in the other, and they’re dancing,” he says. “It’s a very macho thing to do.”

Bill Zimmerman, who at one time was unwilling to dance with his wife, offers another reason why men steer clear of the dance floor: male pride.

The real reason why men won’t dance is that “ it’s generally true that men don’t like looking like idiots in front of their peers,” he says. “You don’t start off knowing how to do it well, and it’s a public thing, so you just wind up never doing it.”

Zimmerman, a Florida physicist, and his physician-wife started dance lessons two years ago and got hooked. They now take four hours of private lessons a week while their sons, 5 and 8, take children’s lessons.

“It’s gotten totally out of hand. Now, it’s the family pastime,” says Zimmerman, who plans to enter dance competitions with his wife.

“Dancing is  something that Edie and I can do in common,” he says. “I wish I had done this several years earlier.”

“I think the majority of men have very hard rhythmic timing–they don’t know how to move their bodies,” says Webert, who co-owns a dance studio here. “Most of the time, women are faster natural dancers than men.” 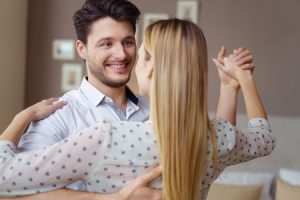 “I had one man walk out of class,” he says. “He came in, he stayed 30 minutes and he left. It’s because he was intimidated–he was the vice president of his business.”

But Webert believes that by refusing to learn how to dance, men are missing out.

For one, he says, because dancing is an important social skill in many cultures, U.S. businessmen who don’t dance are at a disadvantage to competitors that do – especially those from Asia or Europe who probably know how.

“If you can do a waltz and you’re the president of a company, you can impress a lot of people,” Viramontez points out.

Find a dance studio/instructor near you here